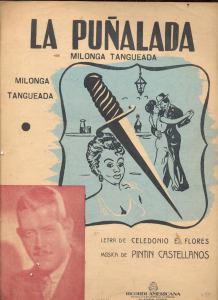 In 1943 Juan D’Arienzo recorded a new disc, which was sold in 17,000,000 copies. Even by today’s standards this number is insane… and, in the domain of tango music, the record has never been beaten. The disk contained immortal “La Cumparsita” on side A, and milonga milonga “La puñalada” on side B.  Interestingly enough, both of them came not from Buenos Aires, but from Montevideo.

Only nine years ago, Francisco Canaro, in the middle of a live performance unleashed on unsuspecting dancing public “Milonga Sentimental”, thus giving birth to a new dance. Before that, milongas were only sung, but never danced. Even the first recording of “Milonga Sentimental”, which Canaro made with Ada Falcón in the end of 1932, was in a pure cancion fashion. But now, in 1933 milonga is a new dance, and it is quite a trending dance, indeed.

Coincidentally, in the same year 1933, a little-known tango performer and composer from Montevideo, Pintín Castellanos, made his first public appearance, in the night club of Carrasco. By his own words, Pintín was always fond of the atmosphere of the outskirts, and, not surprisingly, the new tango that he recently wrote, was called “La puñalada”. Puñalada is a wound, made by puña, a spiky-shaped knife, which deadly gleam could be seen in the dark of a night club, when an argument erupted.

This tango did not enjoy much of exposure, until the spring of 1936, when Juan D’Arienzo, preparing for his yearly tour to Montevideo, started looking for some new music. In 1936 milongas were well planted in the repertoire of major tango orquestas, and D’Arienzo was not an exception. D’Arienzo was a friend of Castellanos, and so he was aware of his recent works, suspecting, and rightfully so, that he would enjoy a warm reception, playing something that was already known locally. But it was the genius of Rodolfo Biagi, who, together with D’Arienzo arranger, violinist Domingo Mancuso, transcribed “La puñalada” into a punchy milonga.

On an extremely hot day in the summer of 1936, Pintín Castellanos came to Café Tupí Nambá, overcrowded with D’Arienzo fans. The King of the Beat noticed the old friend in the crowd, and warned him that there would be a special surprise for him, immediately following the break. The orquesta gathered on the stage… and Pintín barely recognized his tango in the punchy sound of D’Arienzo orquesta, liberally sprayed with Biagi’s adornos. The crowd went wild…

Oddly enough, the godfather of milongas, Francisco Canaro, when making his first recording of “La puñalada” only one month after D’Arienzo, decided to keep the old, tango beat. However, Canaro re-recorded it twice, already as a milonga, in the 40s and in the 50s. Overall, there are over a hundred of different renditions of “La puñalada”, including vocal ones. Here are just a few of them, compiled with full lyrics and English translation by Paul Bottomer, on Today Tango Is… channel: